By now you have probably heard about some of the events that unfolded at Lending Club last month. If not, you may want to first read our May newsletter, where our CEO, Bo Brustkern provides a comprehensive debrief of the Lending Club news.

As the dust begins to settle, and investors try to regain confidence in Lending Club and the peer to peer lending industry, yesterday Lending Club disclosed some key findings and projections for the future after initially delaying their annual meeting. These findings come after an extensive audit of loan books and operating procedures by a Big 4 Accounting Firm.

Our team listened in on the annual meeting yesterday and reviewed Lending Club’s press release  to provide a status update. Here’s what we now understand:

Note that this information was provided to the public via press release and during the shareholder meeting webcast, neither of which are subject to audit. We have not independently verified the above claims.

Where are the improperly issued loans?

We were interested to uncover which loans were made to the Co-Founder and his family, so we dug a bit deeper into the data. To our surprise, we easily found a number of loans that seem to be part of the 32. It’s interesting that no one has called these loans into question up until now because upon review — and with hindsight being 20/20 — it seems obvious now that something fishy was going on. This is most likely because no one was looking for inconsistencies in a manner that would have detected them. Here is a sample of four of the loans that we believe may have been issued to the same borrower in December, 2009. The same credit profile, same borrower location, issue date within days of each other – all for amounts exceeding $20,000. 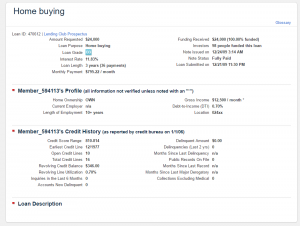 Despite the fact that this errant behavior was not caught — either by LC or a third party independently observing the data — we place tremendous value on the transparency of data that allows open examination like this.  Going forward, we expect not only LC but many within the ecosystem to enhance their business practices to minimize the possibility that this might happen again.

What does this mean for investors?

Most of the news announced today provides us greater confidence in the leadership team and the continued growth of Lending Club. Yes, it appears LC engaged in improper behaviors while under the leadership of Mr Laplanche. Today’s management, led by Mr Morris on the board and Mr Sanborn as chief executive, appears serious and steadfast in correcting the issues and marching forward to a brighter future — and by that we mean more transparent, more compliant, and more trustworthy than ever.

It will certainly take time to restore investor confidence. NSR Invest has and will continue to monitor the performance of p2p loans at Lending Club. Thus far, we are pleased with loan performance and we are further encouraged by recent interest rate increases. With credit quality under control, a path to renewed investor confidence and growth, we continue to believe strongly in this asset class as a viable investment opportunity to provide competitive risk-adjusted returns, and Lending Club as a fundamental player in the ecosystem.

Zach is responsible for product management at NSR Invest and has been investing in peer-to-peer loans since early 2009. He is an entrepreneur with several startups under his belt, and extensive experience with equities and marketplace lending. Through his experience, he brings unique, data-driven insight to our clients to help them better understand how their p2p investments fit into their broader portfolio.