Standard and Poors in conjunction with Experian publishes consumer default information every month. This is a fascinating source of information because it gives key indicators to America’s ability to service debt repayment. As to be expected there was a significant spike in default during the peak of the financial crisis. The good news, the default rates have come down significantly in the last two years. I’m going to spend a little time explaining each category. In addition to plotting all of the data into a chart, I also added the unemployment rate from the Bureau of Labor Statistics to draw comparison.

From their website:
“The S&P/Experian Consumer Credit Default Indices (‘The Indices’) are designed to be independent and consistent benchmarks for consumer credit defaults in the U.S. Their purpose is to seek to measure the balance weighted proportion of consumer credit accounts that go into default for the first time based on sample data provided by Experian”.

They break it down into 4 categories:

Their core equation revolves around finding the balance of all new bad debt, in other words, all of the newly lost principal for the month and dividing it by the balance of summation of all balances in good standing + newly bad balances for that month. In the following month, the previous month’s bad debt will no longer contribute to the denominator.

This equation may seem simple, and in reality it is. However it is nearly impossible to calculate this value 100% with Lending Club’s export. You would effectively need calculate the amortization table for every loan to find out the historical balances. In addition you would need the dates the loans were paid off / defaulted. Prosper on the other hand does provide this information, but only has usable data starting with the Prosper 2.0 launch. At some point in the future I’d like to automate this analysis for both platforms, and plot their performance against this index. 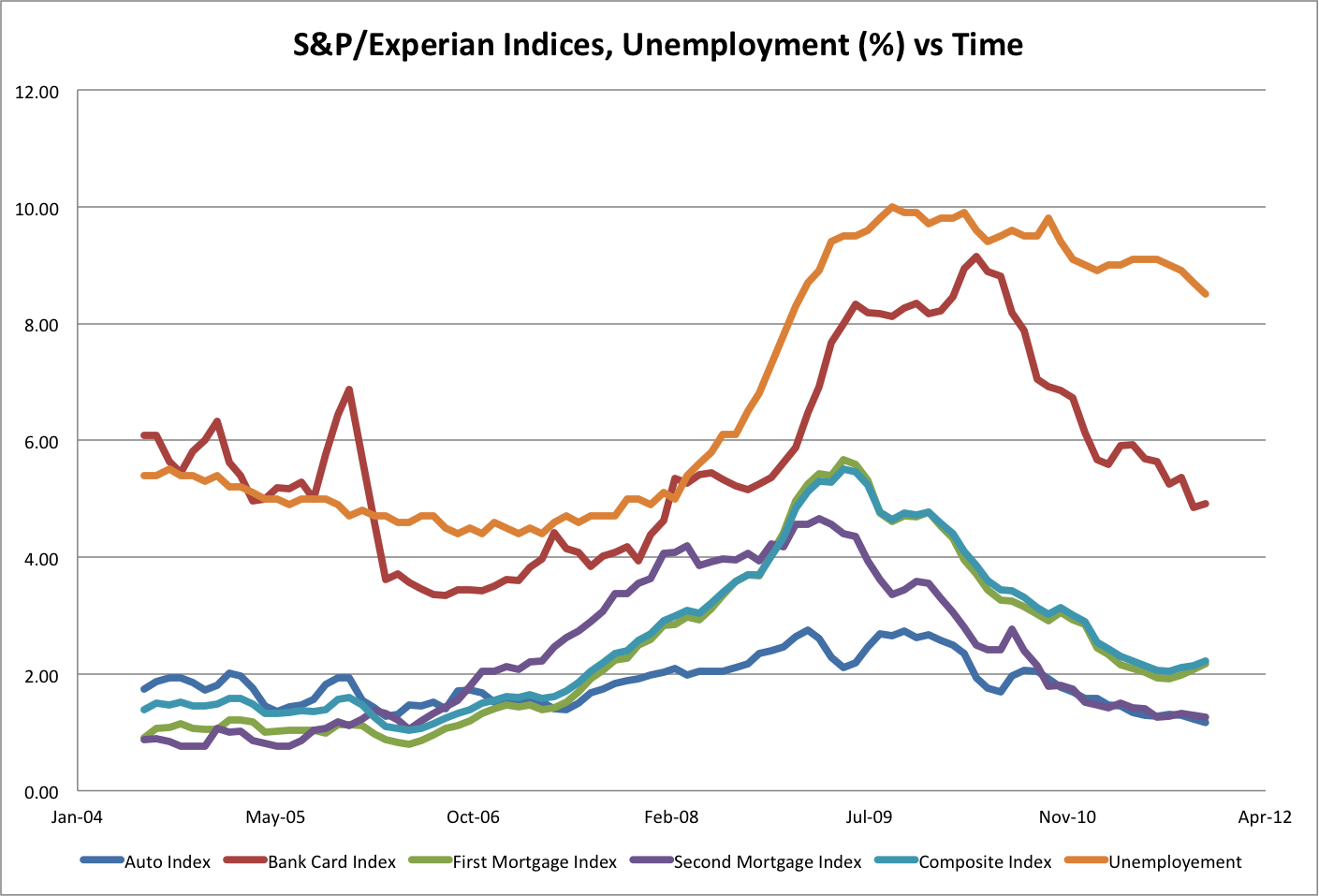 As mentioned before, the Experian indices do not over consumer debt lines over 25K. I believe this is import because Lending Cub offers loans over 25K up to 35K. So any conclusions you draw from the chart may not be applicable to Lending Club’s high principal loans.

I also found it interesting the cars have the lowest default rate. This could be because they are secured debt, but could also be because most car loans are actually less than house and credit card payments usually. But then again, perhaps this is the last item people are really willing to give up. If they turn in the keys to their house, they can always rent. But once the car is gone, the only alternative is public transportation which many would be unwilling to do.

Another interesting trend is that first mortgage default rates almost mirrored the composite index (the combination of all 4 indexes – remember I added unemployment for reference).